New York – Mood tracking is not a new concept. In fact, it has been a central aspect of such things like Cognitive Behavioral Therapy (CBT), helping people to recognize and monitor the fluctuation of how they feel throughout the day. It’s been proven to work and behavior and decision making has been intrinsically linked to things like mood. We know that our emotions are subjective and can muddle our ability to make objective decisions. To put things in even more perspective, we know that consumer interactions and buying power are linked to decision making, however, understanding whether a person is in an objective or subjective state of mind can be crucial when choosing the next step of a journey.

Again, understanding the links of mood and behavior is not new, nor is the tracking aspect of it. But, what if technology could do a better job of understanding our mindset and recognizing how we feel? It’s another level of AI, that to some could illicit fear or negativity: Is this a further invasion of privacy? How can a machine know me? Will a company use this information to their advantage? The truth is that this is relatively uncharted territory. That being said, there are companies, like Amazon, that are investing in mood tracking. In some ways it’s genius, in other ways it feels invasive. Time will tell how products and services like this will be adopted and regulated.

Through Alexa, Amazon has become even more pervasive in our daily lives. We control our lighting, our televisions, and our alarms with it. We ask it the weather or how to translate phrases. Recently, TechCrunch and Bloomberg reported that Amazon is working on an emotion tracking device. The fascinating aspect of this is that the device will help Alexa understand a person’s mood and then speak to them in a way that will be most resonant to them. This device would be wearing, linked to user’s mobile phones and through that linked to various Alexa compatible devices. Furthermore, the technology aims to use microphones paired to software that can classify the user’s emotional state based on the sound of their voice. Bloomberg also asserts that the device could also help people in their interactions with others. The implications of this are endless, including daily health considerations. Could we start seeing an era where:

It’s important to understand that this device is strictly under development and the potential of commercialization is undetermined. That being said, with the massive technological evolution that we’ve seen in recent decades, the possibility of this coming to market is not unfathomable; it seems like a realistic possibility given that the company is already in tight-lipped beta trials. Currently, devices like Empatica, MUSE, Feel, and Upmood, do exist, with some not even in market yet. But most of these devices have limitations or niche capabilities and are not integrated into such a pervasive platform, like Alexa. Rosalind Picard, from MIT Media Lab has been working with her students to develop wrist-based sensors that can pinpoint stress. The device is currently 80% accurate. Another example includes a fashion initiative where the color of the collar of a sweater will change based on mood, using sensors placed on the wearer’s hands.

Whereas technology like this was once something you might find in a Philip K. Dick novel, now mood tracking is becoming a focal point. As we move forward, companies and individuals should consider how this will become part of daily life, change behavior, and be both an asset and a burden. Product development like Amazon is becoming incredibly more rapid, so while this product is not yet available, it may be crucial to government and brands to understand its harnessing potential. Society as a whole, one individual at a time, will either embrace this technology or shun it, though tech-based mood tracking is becoming an acknowledged and moderately accepted practice. It’s the pervasiveness through software like Alexa that eventually could prove divisive amongst different types of consumers.

A creative director by trade, Cheena has worked with some of the world’s biggest brands, startups and agencies. Specializing in using design thinking, technology and strategy to build out creative solutions, she adds her expertise to the Syneos Health Communications team as Director of Innovation. During her career, she has been at the cutting edge of the industry with experience in augmented reality, social listening, media theory and user experience. With over 13 years of experience, much of her focus has revolved around solving communication challenges and creating brand engagement in a culturally relevant way. She also has been an instructor at Miami Ad School NY for over 6 years, mentoring new creatives on developing integrated campaigns, understanding media, interactive concepting, and working with account planning teams. 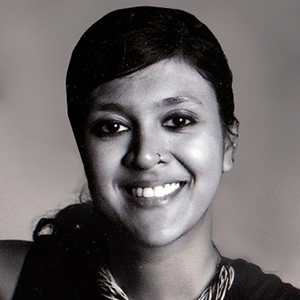